One-way Analysis of VarianceIn this section, we will discuss how can we assess whether the population means of a continuous variable are different for different groups.

Consider a setting in which we have a continuous variable #Y#, which we call the response or outcome variable, whose values may depend on the levels of one or more categorical variables, which we call factors.

In the sciences, this setting often arises in a factorial experiment, in which subjects (the experimental units) are assigned to treatment groups which are distinguished by various combinations of treatments. All members of the same treatment group are called replicates.

One-factor ExperimentIn a one-factor experiment, the treatment groups are distinguished by the level of a single categorical factor.

For example, consider an experiment in which the response variable is the change in systolic blood pressure, and the factor is the type of video clip viewed.

Suppose there are five levels (categories) for this factor: the baseline level, which views a neutral video clip, and four other levels corresponding to different video clips showing one of four different intense action scenes: a car chase, a sword fight, skiing down an expert-level slope, and a boxing match.

The research question is whether the type of video clip watched has some influence on the blood pressure within some specified population. In other words, is the mean change in systolic blood pressure the same no matter which video clip is viewed?

One-Way ANOVA Model and HypothesesThe one-way Analysis of Variance model for the value of the response variable #Y# for a subject randomly-selected from level #i# of the factor is:\[Y_i = \mu_i + \varepsilon\]

We call #\varepsilon# the error, by which we mean the amount by which the value of #Y# deviates from #\mu_i# for a randomly-selected subject from group #i#.

Note: usually #I > 2#, otherwise this is just a test for difference in means.

Sample Mean and Grand Sample MeanLet #Y_{ij}# denote the measured value of the response for the #j#th replicate in the treatment group corresponding to level #i# of the factor.

Thus if #H_0# is true, each #\bar{Y}_i# should be close to #\bar{Y}#, relative to the sample variability within the individual treatment groups.

Consequently, we compare the variance between the groups to the variance within the groups, which is why the procedure is called the Analysis of Variance (ANOVA). When there is only one factor involved, it is called One-Way ANOVA.
\[\text{}\] To conduct inference, several assumptions must be satisfied.

One-way ANOVA AssumptionsLet \[Y_{ij} = \mu_i + \varepsilon_{ij}\] denote the value of the response variable for the #j#th replicate randomly-assigned to treatment group #i# from the population. Thus #Y_{ij}# has mean #\mu_i# and randomly deviates from this mean by #\varepsilon_{ij}#.

The assumption that #\sigma^2# is the same for all the treatment groups is called constant variance or homoscedasticity.

A scatterplot of these residuals against the corresponding fitted values #\bar{Y}_1,...\bar{Y}_I# should show approximately the same spread for each fitted value, and no extreme outliers, as seen in the following plot:

Furthermore, for each #i# a Normal quantile-quantile plot should also be used to confirm the assumption of normality of #Y_{ij}# for each level #i#. The following plot casts doubt on this assumption for group 1 and group 2:

Then let \[MSTr = \cfrac{SSTr}{I - 1}\] denote the treatment mean square. This is a measure of the variance of the treatment group sample means around the sample grand mean, i.e., the between-groups variance.

Finally, let \[MSE = \cfrac{SSE}{N - I}\] denote the mean square error. This is a measure of the variance of the replicates in each treatment group around their treatment group sample mean, i.e., the within-groups variance, and thus is an unbiased estimate of #\sigma^2#.

The P-value of the test is computed as #P(F \geq f)#, where #f# is the observed value of #F#. Statistical software typically displays this information in an ANOVA table.

A small P-value is evidence against #H_0# and supports the conclusion that the population means #\mu_1,...,\mu_I# are not the same for all treatment groups, i.e., that the factor has a significant effect on the response.

One-Way ANOVA in R#\mathrm{R}# can be used to efficiently conduct analysis of variance (ANOVA). We demonstrate this using the following data, which you can copy and paste into #\mathrm{R}#:

Here #\mathtt{Y}# is the response variable, and #\mathtt{Group}# is the categorical factor, which has 3 levels.

There are #15# subjects, and the #k#th position in the two vectors gives the group level and the response variable measurement for the #k#th subject, for #k = 1,...,15#. We merge these together into a data frame which we aptly name #\mathtt{Data}#. (If you read data into #\mathrm{R}# from a file using the #\mathtt{read.table()}# function, it will be loaded as a data frame. You can give it any name you like, though Data usually makes the most sense.)

We stored the output from the #\mathtt{aov()}# function in an object that we named #\mathtt{Model}#. You can choose any name you like.

The output of the #\mathtt{summary()}# function is an ANOVA table (which we can also obtain using #\mathtt{anova(Model)}#), which allows us to see the treatment sum of squares (in the first row, after #\mathtt{“factor(Group)”}#) and the error sum of squares (in the second row, after #\mathtt{“Residuals”}#), preceded by their respective degrees of freedom and followed by their mean squares, the F-statistic and the P-value for the F-test of the null hypothesis #H_0: \mu_1 = \mu_2 = \mu_3# against the alternative hypothesis #H_1: \mu_i \neq \mu_j# for at least one pair #i# and #j#:

The #\mathtt{“Signif.codes”}# let you know how small the P-value of the F-test is, in case you can't figure that out yourself.

Here the given P-value translates as #0.00000838#, which is between #0# and #0.001#, as signified by #3# stars. So we would reject the null hypothesis and conclude that there are at least two population means which differ out of the three groups. However, this conclusion is only valid if the assumptions are satisfied.

To qualitatively check the normality of #\mathtt{Y}# in each group, we can use a single Q-Q-plot of the model residuals: 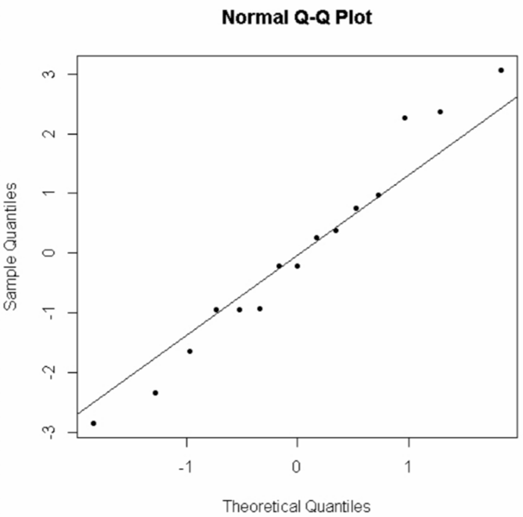 The points are close enough to the line that we would not reject the assumption of normality.

A small P-value implies that the residuals do not come from a normal distribution, which in turn implies that the dependent variable is not normally-distributed in each group of the factor. This violates the assumption and makes any inference based on that assumption invalid.

To qualitatively check the assumption of constant variance (homoscedasticity), we can make a scatterplot of the model residuals against the fitted values (i.e., the group sample means): 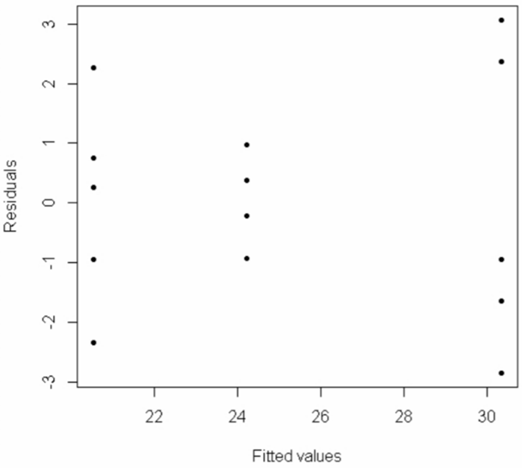 A small P-value implies that the constant variance assumption is violated, and thereby invalidates any inference based on this assumption.

For the data, if you need the group sample means, along with the overall mean (the "grand mean"), use the #\mathtt{model.tables()}# function, with the setting #\mathtt{type=“means”}#:

However, if you want confidence intervals for the population means, you have to first fit a new model with a small adjustment: you have to put '#\mathtt{0 +}#' after the '#\mathtt{\sim}#' symbol.

Then you can use the #\mathtt{confint()}# function on this adjusted model to obtain confidence intervals for the population means in each group, at any specified confidence level (default is 95%):

We get the output:

Archaeologists can determine the diets of ancient civilizations by measuring the ratio of carbon-13 to carbon-12 in bones found at burial sites. Large amount of carbon-13 suggests a diet rich in grasses such as maize, while small amounts suggest a diet based on herbaceous plants.

An article from 2002 reports ratios, as a difference from a standard in units of parts per thousand, for bones from individuals in several age groups. The data can be pasted into #\mathrm{R}# using the below code:

Produce the ANOVA table, including the P-value of this test, and state the appropriate conclusion. Also report #95\%# CIs for the population mean ratio of each age group.

The output gives the ANOVA table:

Based on the large P-value of #0.453#, we do not reject the null hypothesis. So we cannot conclude that the ratios differ among the age groups.

We can obtain #95\%# CIs for the population mean ratio for each of the 4 groups as follows:

We can see that all four CIs overlap substantially, which is consistent with our findings above.