If an explicit first-order dynamic system has no exact solution (in terms of known functions), or if a first orientation of the behavior of the system is desired, the geometric approach with the direction comes into the picture. By following the line elements of the direction field, we find an approximation of the solution curve with given initial condition by means of line segments.

Consider the dynamic system of the form \[\frac{\dd y}{\dd t}=\varphi(t,y)\] where #\varphi# is a continuous function of two variables.

This approach is called Euler's method and the number \(\delta\) is called the step size.

In the figure below the direction field of the dynamic system \[\frac{\dd y}{\dd t}=-0.7y\] is drawn together with the approximation of the solution curve, calculated according to Euler's method with step size \(\delta =1\) and initial condition \( y(0)=6\). As the step size \(\delta \) becomes smaller, the graph of the calculated function values becomes smoother and the graph resembles an exact solution. 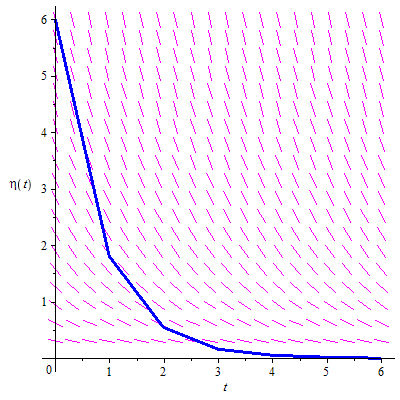 The method is based on the formula of the tangent line to the curve passing through the point #\rv{t_k,\eta_k}# on the solution curve:

If, in the Euler method, a negative time step \(\delta\) is used, the corresponding values of points close to the integral curve can be calculated just as well. Thus, for integral curves passing through a certain point, the Euler method is suitable for calculating approximations toward both the past and the future. 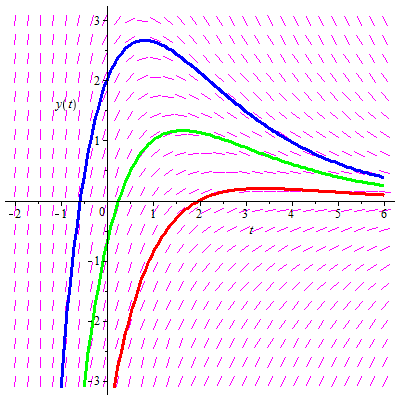 The green integral curve has the general form of the concentration gradient of an orally administered drug. Later we will see that this pharmacokinetic model is also exactly solvable and that solution curves have this form.

In order for you to experience Euler's method an interactive version is presented below.

Enlarge the number #s# of steps in order to see a version with smaller step size, and enter different right hand sides of the differential equation in the input field behind "#\dd y/\dd t =#". Press the update button to see the result.
New example
Unlock full access