For example, a score that is located 5 units above the mean could either represent a large or a small distance from the mean, depending on the magnitude of the scores:

A z-score or standard score is the standardized form of a deviation score.

Specifically, a z-score expresses a score's deviation from the mean in terms of standard deviation units.

The sign of a z-score conveys the same information as the sign of a deviation score, namely on which side of the mean the score is located: 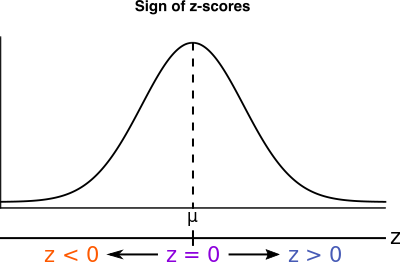 #\phantom{0}#
Contrary to the value of a deviation score, the value of a z-score is a good indication of the exact location of a score because z-scores are independent of the measurement units used. This makes z-scores particularly well-suited for comparing scores that originate from different distributions. If two observations from two different distributions have the same z-score, this means that both scores are located at the same relative position within their respective distributions.

The formula for transforming sample scores into their corresponding z-scores is the following:
\[z=\dfrac{X-\bar{X}}{s}=\dfrac{65-40}{20}=1.25\]
New example
Unlock full access