Exponential functions occur naturally in real life. Consider, for example, the number of bacteria that grow in a culture medium where each minute every bacterium splits into two bacteria. If we start with one bacterium, then after one minute we have two bacteria, after 2 minutes 4 bacteria, and so on: 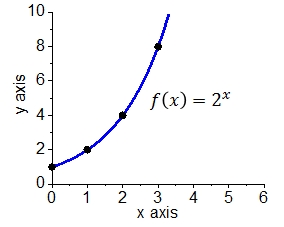 The function \(2^x\) is an of an example of an exponential function:

Later we will see that, if #a\gt1#, the exponential function #a^x# grows faster than any power function.