Systems of linear equations and matrices: Systems of Linear Equations

Equation of a plane in three-dimensional space

Conversely, each pair of linear equations in #x#, #y#, #z# that describe the same plane is equal up to a constant multiple.

By describing planes in terms of equations, we are able to find points of intersection of planes as solutions of systems of linear equations.

The intersection of two planes that are not parallel, is a line and can be described with the aid of a single parameter.

If several different planes have a common pont of intersection, then their intersection is a point or a line.

Lines A line can be described by two linear equations, which belong to different planes. Those planes are not uniquely determined: each pair of planes containing the line is associated with a pair of equations describing the line (that is to say, the solution of which is the line).

Planes are parallel if and only if they have the same normal vectors. Two planes do not have any points of intersection in that case alone.

It is possible that three non-parallel planes have no common intersection points. An example is given below.

Also, an equation of the plane passing through three different points can be found by solving a system of linear equations:

Not unique If the three points \(\vec{p}\), \(\vec{q}\), and \(\vec{r}\) lie on one line, then there are more planes that satisfy the conditions. If not, then there is exactly one such plane, and the coefficients #a#, #b#, #c#, #d# of the equation of the plane are uniquely determined up to a scalar multiple.

The constant term #d# can be made to disappear from the equations by subtracting one equation from another. By means of the dot product, the resulting equations can be written as \[\rv{a,b,c}\boldsymbol{\cdot}\left(\vec{p}-\vec{q}\right)=0\] for the equations involving #\vec{p}# and #\vec{q}#, and similarly for the other pairs of points. The normal vector #\rv{a,b,c}# can be found as a solution of these equations.

The linear equation can be written explicitly:

However, it is more convenient to solve the system of linear equations using standard techniques than to memorize this formula. 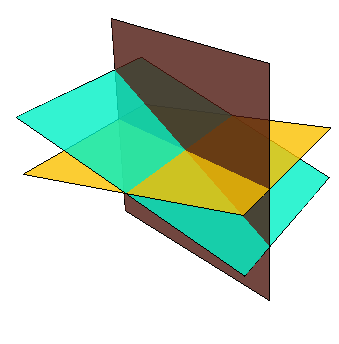