The statistical software package #\mathrm{R}# can be used to efficiently conduct a one-way ANOVA. We demonstrate this using the following data, which you can copy and paste into #\mathrm{R}#:

Here #\mathtt{Y}# is the outcome variable, and #\mathtt{Group}# is the categorical factor, which has 3 levels. There are #15# observations, and the #k#th position in the two vectors gives the level of the factor and the value of outcome variable for the #k#th subject, for #k = 1,...,15#.

We merge these together into a data frame that we conveniently name #\mathtt{Data}#. (If you read data into #\mathrm{R}# from a file using the #\mathtt{read.table()}# function, it will be loaded as a data frame. You can give it any name you like, though Data usually makes the most sense.)

The research question we would like to answer is: Is the population mean of the outcome variable #Y# the same across all three groups?

To test the null hypothesis of equal population means, we first create the ANOVA model using the #\mathtt{aov()}# function.

We store the output from the #\mathtt{aov()}# function in an object that we name #\mathtt{Model}#. You can choose any name you like.

Now that the ANOVA model has been constructed, we next use the #\mathtt{summary()}# function on the model object to inspect the results of the analysis:

As such, we would reject the null hypothesis and conclude that there are at least two population means which differ out of the three groups. However, this conclusion is only valid if the assumptions are satisfied.

If the conclusion of the one-way ANOVA is to reject the null hypothesis of equal means, then there are two assumptions that we need to check before moving on to the post hoc analysis:

In both cases, we first plot the relevant data to get a first impression of the situation, before proceeding with a formal test of the assumption.

In order to visually inspect the normality of the outcome variable #\mathtt{Y}# in each group, we create a Q-Q-plot of the model residuals: 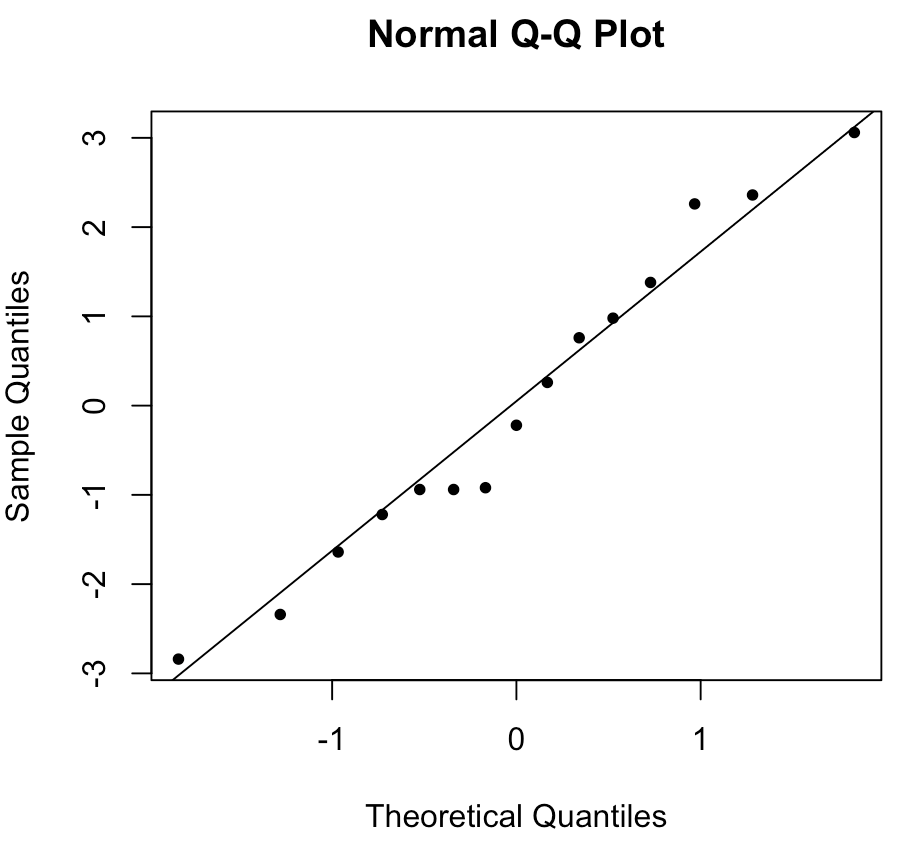 In this case, the points are close enough to the line that we can be fairly confident that the assumption of normality is satisfied.

Here, the #p#-value of #p=0.882# is so large that the null hypothesis of the test would not be rejected at any reasonable significance level #\alpha#. We can thus conclude that the normality assumption is satisfied.

In order to visually inspect the variance of the residuals, we make a scatterplot of the model residuals against the fitted values (i.e., the group sample means): 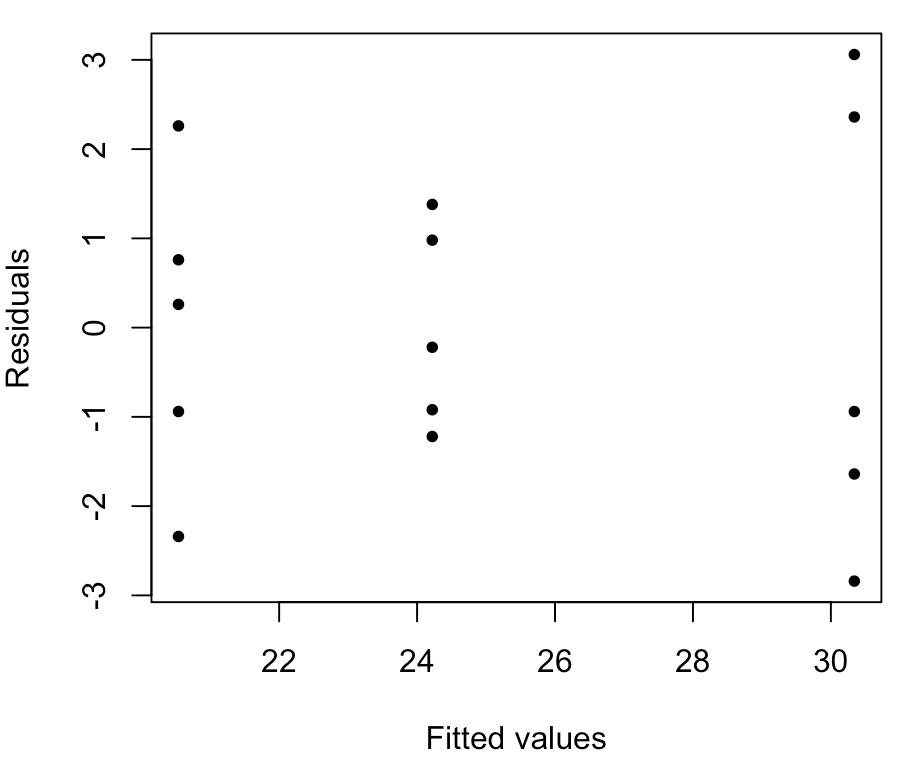 To formally assess the homogeneity assumption we use Barlett's test to test the following hypotheses:
\[\begin{array}{rcl}
H_0&:&\text{The population variances are all equal.}\\\\
H_a&:&\text{The population variances are not all equal.}
\end{array}\] To run the test, we use the #\mathtt{bartlett.test()}# function, which takes the same input as the #\mathtt{aov()}# function we used earlier:

Here, the #p#-value of #p=0.3275# is so large that the null hypothesis of the test would not be rejected at any reasonable significance level #\alpha#. We can thus conclude that the homogeneity of variance assumption is satisfied.

The final step of the ANOVA procedure is to run a post hoc analysis to determine which of the population means differ from each other.

Since the assumption of equal population variances is satisfied, the Tukey-Kramer HSD test is recommended. To run this test, we use the #\mathtt{TukeyHSD()}# function, which takes the #\mathtt{Model}# object as its input: