Deviation from the Mean and the Sum of Squares

A very important concept in statistics is a score's distance or deviation from its mean.

To calculate a score's deviation score, subtract the mean of the distribution from the raw score.

The sign of the deviation score indicates on which side of the mean the score is located:

The value of the deviation score indicates the absolute distance between the score and the mean of the distribution. 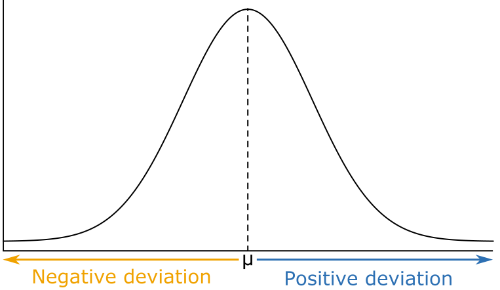 Deviation scores serve as the basis for numerous statistical measures, including:

The sum of the squared deviation scores is referred to as the sum of squares and is abbreviated as #SS#.

The sum of squares serves as the basis for numerous statistical measures and analyses, including:

Teacher access
Request a demo account. We will help you get started with our digital learning environment.
Create demo account
Student access
Is your university not a partner? Get access to our courses via Pass Your Math independent of your university. See pricing and more.
Or visit omptest.org if jou are taking an OMPT exam.
More info
About us ⋅ Help ⋅ Privacy ⋅ Terms and conditions
Copyright © 2021 SOWISO B.V.